This topic provides concepts related to end-to-end encryption in Snowflake.

End-to-end encryption (E2EE) is a method to secure data that prevents third parties from reading data while at-rest or in transit to and from Snowflake and to minimize the attack surface.

The figure illustrates the E2EE system in Snowflake: 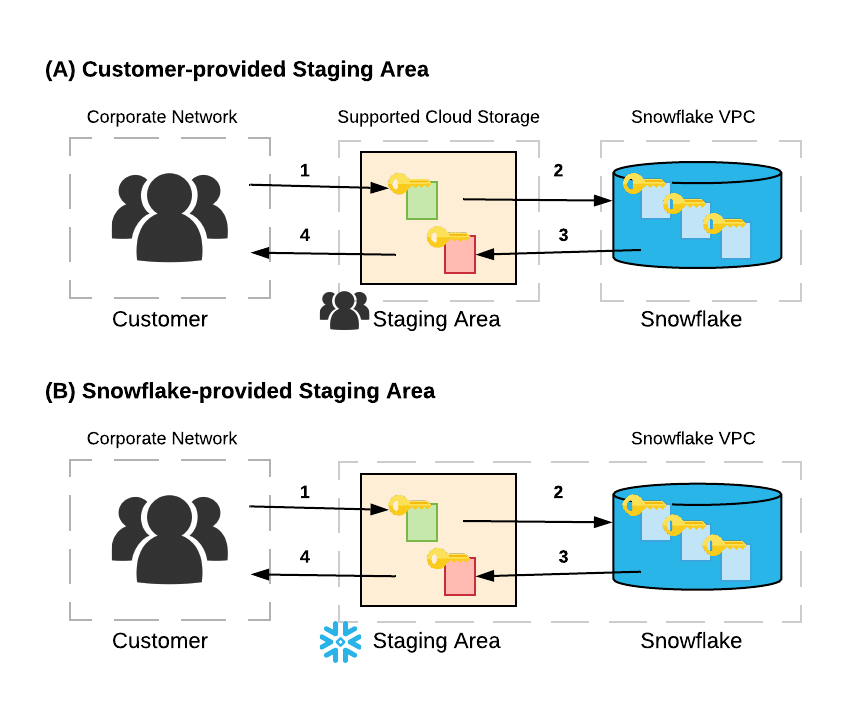 Snowflake supports both internal (Snowflake-provided) and external (customer-provided) stages for data files. Snowflake provides internal stages where you can upload and group your data files before loading the data into tables (image B).

Per the figure in this section, the flow of E2EE in Snowflake is as follows:

Next, the client decrypts the encrypted file using the now decrypted random key. This encryption and decryption happens on the client side.

Snowflake supports the client-side encryption protocol using a client-side master key when reading or writing data between a cloud storage service stage and Snowflake, as shown in the following image:

To load client-side encrypted data from a customer-provided stage, you create a named stage object with an additional MASTER_KEY parameter using a CREATE STAGE command, and then load data from the stage into your Snowflake tables. The MASTER_KEY parameter requires either a 128-bit or 256-bit Advanced Encryption Standard (AES) key encoded in Base64.

A named stage object stores settings related to a stage and provides a convenient way to load or unload data between Snowflake and a specific container in cloud storage. The following SQL snippet creates an example Amazon S3 stage object in Snowflake that supports client-side encryption:

The truncated master key specified in this SQL command is the Base64-encoded string of the customer’s secret master key. As with all other credentials, this master key is transmitted over Transport Layer Security (HTTPS) to Snowflake and is stored encrypted in metadata storage. Only the customer and the query-processing components of Snowflake are exposed to the master key.

A benefit of named stage objects is that they can be granted to other users within a Snowflake account without revealing access credentials or client-side encryption keys to those users. Users with the appropriate access control privileges simply reference the named stage object when loading or unloading data.

The following SQL commands create a table named users and copy data from the encrypted stage into the users table:

The data is now ready to be analyzed using Snowflake.