Preview support for this feature is available to accounts on GCP.

Note: This feature is generally available on AWS and Azure.

This topic shows how to create and install a Java user-defined function (UDF).

When you write a Java UDF, you write Java code for Snowflake to execute as UDF logic. This Java code is the UDF’s handler. You deploy the UDF with CREATE FUNCTION, giving the UDF a name and specifying the Java method as the handler to use when the UDF is called.

Writing the UDF Handler in Java¶

Use the following requirements and guidelines when writing your Java UDF handler.

Creating the Function in Snowflake¶

The information in this section applies to all Java UDFs, regardless of whether the code is specified in-line or pre-compiled.

You must execute a CREATE FUNCTION statement to specify aspects of the UDF, including:

The UDF name does not need to match the name of the handler method written in Java. The CREATE FUNCTION statement associates the UDF name with the Java method, as shown in the following diagram: 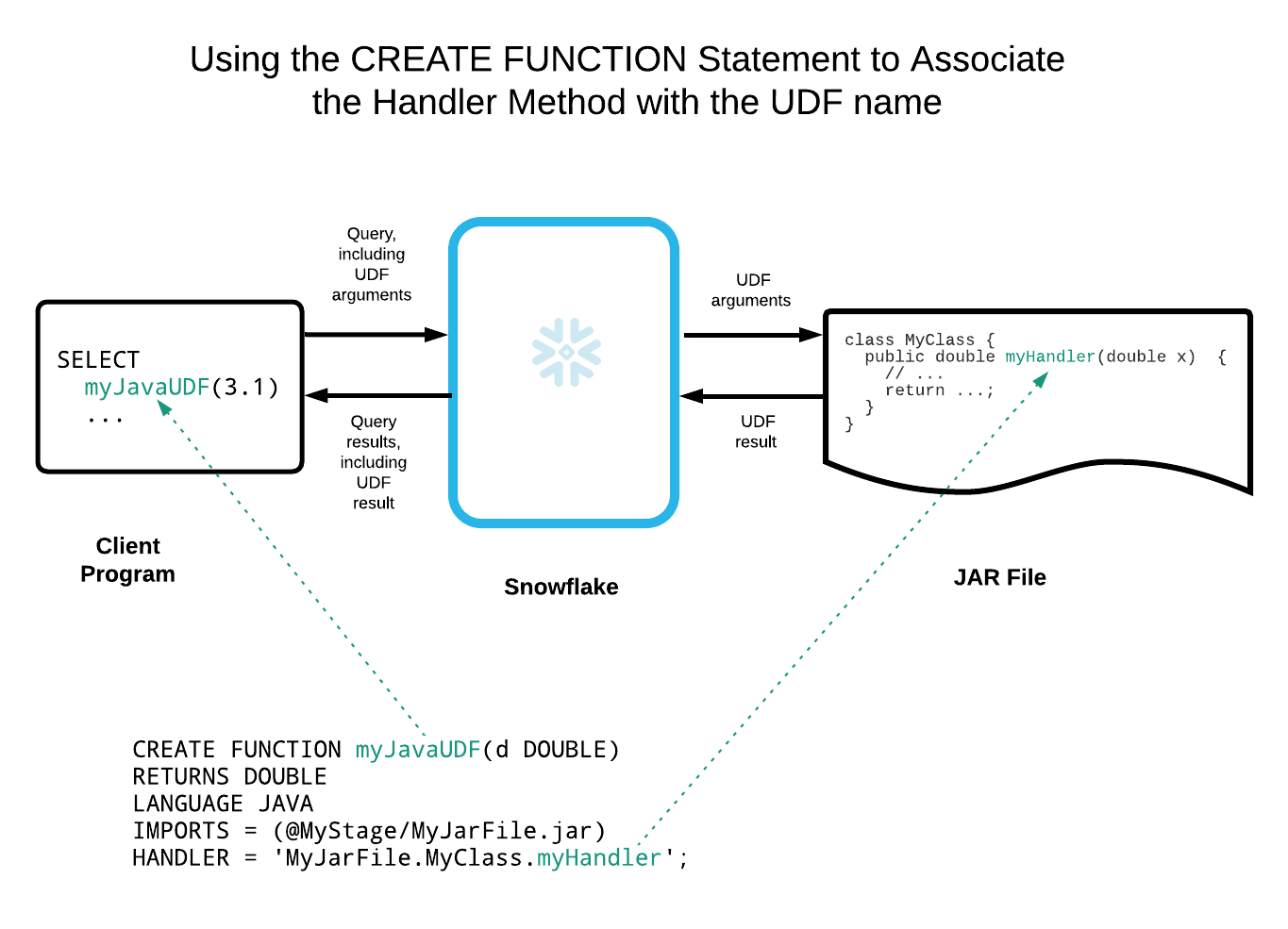 When choosing a name for the UDF:

For information about the data types of arguments, see SQL-Java Data Type Mappings for Parameters and Return Types.

Scalar functions (UDFs) have a limit of 500 input arguments.

It is recommended that you use the RUNTIME_VERSION parameter of the the CREATE FUNCTION statement to specify which supported Java runtime version to use because the default version may change in the future.

You can define a Java UDF handler in either of the following ways:

For an in-line UDF, you supply the Java source code as part of the CREATE FUNCTION statement.

Code in the following example declares an add UDF whose handler is the add method in the TestAddFunc class.

An in-line Java UDF (like a pre-compiled Java UDF) can call code in JAR files that are included in the CREATE FUNCTION statement’s IMPORTS clause.

When you intend to create a UDF that specifies the location of an existing JAR for its handler, you develop the handler by:

If you plan to compile the Java code to create the JAR file yourself, you can organize the files as shown below. This example assumes that you plan to use Java’s package mechanism.

This directory contains the project-specific files required to create your Java UDF.

This directory contains the .java files to compile and include in the package.

These files contain the Java source code of the UDF.

These are the .class file(s) created by compiling the .java files.

The optional manifest file used when combining the .class files (and optionally, dependency JAR files) into the JAR file.

The JAR file that contains the UDF code.

This file contains the SQL PUT command to copy the JAR file to a Snowflake stage.

Compiling the Java Code and Creating the JAR File¶

To create a JAR file that contains the compiled Java code:

Copying the JAR File to Your Stage¶

In order for Snowflake to read from the JAR containing your handler method, you need to copy the JAR to one of the following kinds of stage:

The stage hosting the JAR file must be readable by the owner of the UDF.

Typically, you upload the JAR to a named internal stage using the PUT command. Note that you can’t execute the PUT command through the Snowflake GUI; you can use SnowSQL to execute PUT. See the Examples section for an example PUT command to copy a .jar file to a stage.

If you delete or rename the JAR file, you can no longer call the UDF.

If you need to update your JAR file, then:

Granting Privileges on the Function¶

For any role other than the owner of the function to call the function, the owner must grant the appropriate privileges to the role.

The following statements create and call an in-line Java UDF. This code returns the VARCHAR passed to it.

This function is declared with the optional CALLED ON NULL INPUT clause to indicate that the function is called even if the value of the input is NULL. (This function would return NULL with or without this clause, but you could modify the code to handle NULL another way, for example, to return an empty string.)

Passing a NULL to an In-line Java UDF¶

The following code shows how to return a NULL value explicitly. The Java value null is converted to SQL NULL.

Passing an OBJECT to an In-line Java UDF¶

The following example uses the SQL OBJECT data type and the corresponding Java data type (Map<String, String>), and extracts a value from the OBJECT. This example also shows that you can pass multiple parameters to a Java UDF.

Create and load a table that contains a column of type OBJECT:

Passing an ARRAY to an In-line Java UDF¶

Passing a GEOGRAPHY Value to an In-line Java UDF¶

You can use the PACKAGES clause to specify a Snowflake system package such as the Snowpark package. When you do, you don’t need to also include the Snowpark JAR file as a value of an IMPORTS clause. For more on PACKAGES, see CREATE FUNCTION optional parameters.

Create data and call the UDF with that data:

The output looks similar to:

Passing a VARIANT Value to an In-line Java UDF¶

The Snowpark Variant type provides methods for converting values between Variant and other types.

To use the Snowpark Variant type, use the PACKAGES clause to specify the Snowpark package when creating the UDF. When you do, you don’t need to also include the Snowpark JAR file as a value of an IMPORTS clause. For more information on PACKAGES, see CREATE FUNCTION optional parameters.

Code in the following example receives JSON data stored as the VARIANT type, then uses the Variant type in the Snowpark library to retrieve the price value from the JSON. The received JSON has a structure similar to the JSON displayed in Sample Data Used in Examples.

The following statements create a simple Java UDF. This sample generally follows the file and directory structure described in Organizing Your Files.

Create a java file that contains your source code:

Optionally, create a manifest file similar to the one shown below:

Compile the source code. This example stores the generated .class file(s) in the directory named classDirectory.

Use the PUT command to copy the JAR file from the local file system to a stage. This example uses the user’s default stage, named @~:

You can store the PUT command in a script file and then execute that file through snowsql. The snowsql command looks similar to the following:

This example assumes that the user’s password is specified in the SNOWSQL_PWD environment variable.