Snowflake’s approach to access control combines aspects from both of the following models:

The key concepts to understanding access control in Snowflake are:

In the Snowflake model, access to securable objects is allowed via privileges assigned to roles, which are in turn assigned to other roles or users. In addition, each securable object has an owner that can grant access to other roles. This model is different from a user-based access control model, in which rights and privileges are assigned to each user or group of users. The Snowflake model is designed to provide a significant amount of both control and flexibility.

To own an object means that a role has the OWNERSHIP privilege on the object. Each securable object is owned by a single role, which by default is the role used to create the object. When this role is assigned to users, they effectively have shared control over the object. In a regular schema, the owner role has all privileges on the object by default, including the ability to grant or revoke privileges on the object to other roles. In addition, ownership can be transferred from one role to another. However, in a managed access schema, object owners lose the ability to make grant decisions. Only the schema owner (i.e. the role with the OWNERSHIP privilege on the schema) or a role with the MANAGE GRANTS privilege can grant privileges on objects in the schema.

The ability to perform SQL actions on objects is defined by the privileges granted to the active role in a user session. The following are examples of SQL actions available on various objects in Snowflake:

Roles are the entities to which privileges on securable objects can be granted and revoked. Roles are assigned to users to allow them to perform actions required for business functions in their organization. A user can be assigned multiple roles. This allows users to switch roles (i.e. choose which role is active in the current Snowflake session) to perform different actions using separate sets of privileges.

Users who have been granted a role with the necessary privileges can create custom roles to meet specific business and security needs.

Roles can be also granted to other roles, creating a hierarchy of roles. The privileges associated with a role are inherited by any roles above that role in the hierarchy. For more information about role hierarchies and privilege inheritance, see Role Hierarchy and Privilege Inheritance (in this topic).

A role owner (i.e. the role that has the OWNERSHIP privilege on the role) does not inherit the privileges of the owned role. Privilege inheritance is only possible within a role hierarchy.

The following role types are essentially the same, except for their scope. Both types enable administrators to authorize and restrict access to objects in your account.

Except where noted in the product documentation, the term role refers to either type.

To permit SQL actions on any object in your account, grant privileges on the object to an account role.

To limit SQL actions to a single database, as well as any object in the database, grant privileges on the object to a database role in the same database.

For more information about database roles, refer to:

Active roles serve as the source of authorization for any action taken by a user in a session. Both the primary role and any secondary roles can be activated in a user session.

A role becomes an active role in either of the following ways:

Role that manages operations at the organization level. More specifically, this role:

Role that encapsulates the SYSADMIN and SECURITYADMIN system-defined roles. It is the top-level role in the system and should be granted only to a limited/controlled number of users in your account.

Role that can manage any object grant globally, as well as create, monitor, and manage users and roles. More specifically, this role:

(aka User and Role Administrator)

Role that is dedicated to user and role management only. More specifically, this role:

Role that has privileges to create warehouses and databases (and other objects) in an account.

If, as recommended, you create a role hierarchy that ultimately assigns all custom roles to the SYSADMIN role, this role also has the ability to grant privileges on warehouses, databases, and other objects to other roles.

This role is typically used in cases where explicit access control is not needed and all users are viewed as equal with regard to their access rights.

Custom account roles can be created using the USERADMIN role (or a higher role) as well as by any role to which the CREATE ROLE privilege has been granted.

Custom database roles can be created by the database owner (i.e. the role that has the OWNERSHIP privilege on the database).

By default, a newly-created role is not assigned to any user, nor granted to any other role.

When creating roles that will serve as the owners of securable objects in the system, Snowflake recommends creating a hierarchy of custom roles, with the top-most custom role assigned to the system role SYSADMIN. This role structure allows system administrators to manage all objects in the account, such as warehouses and database objects, while restricting management of users and roles to the USERADMIN role.

Conversely, if a custom role is not assigned to SYSADMIN through a role hierarchy, the system administrators cannot manage the objects owned by the role. Only those roles granted the MANAGE GRANTS privilege (only the SECURITYADMIN role by default) can view the objects and modify their access grants.

Note that a role that holds the global MANAGE GRANTS privilege can grant additional privileges to the current (grantor) role. 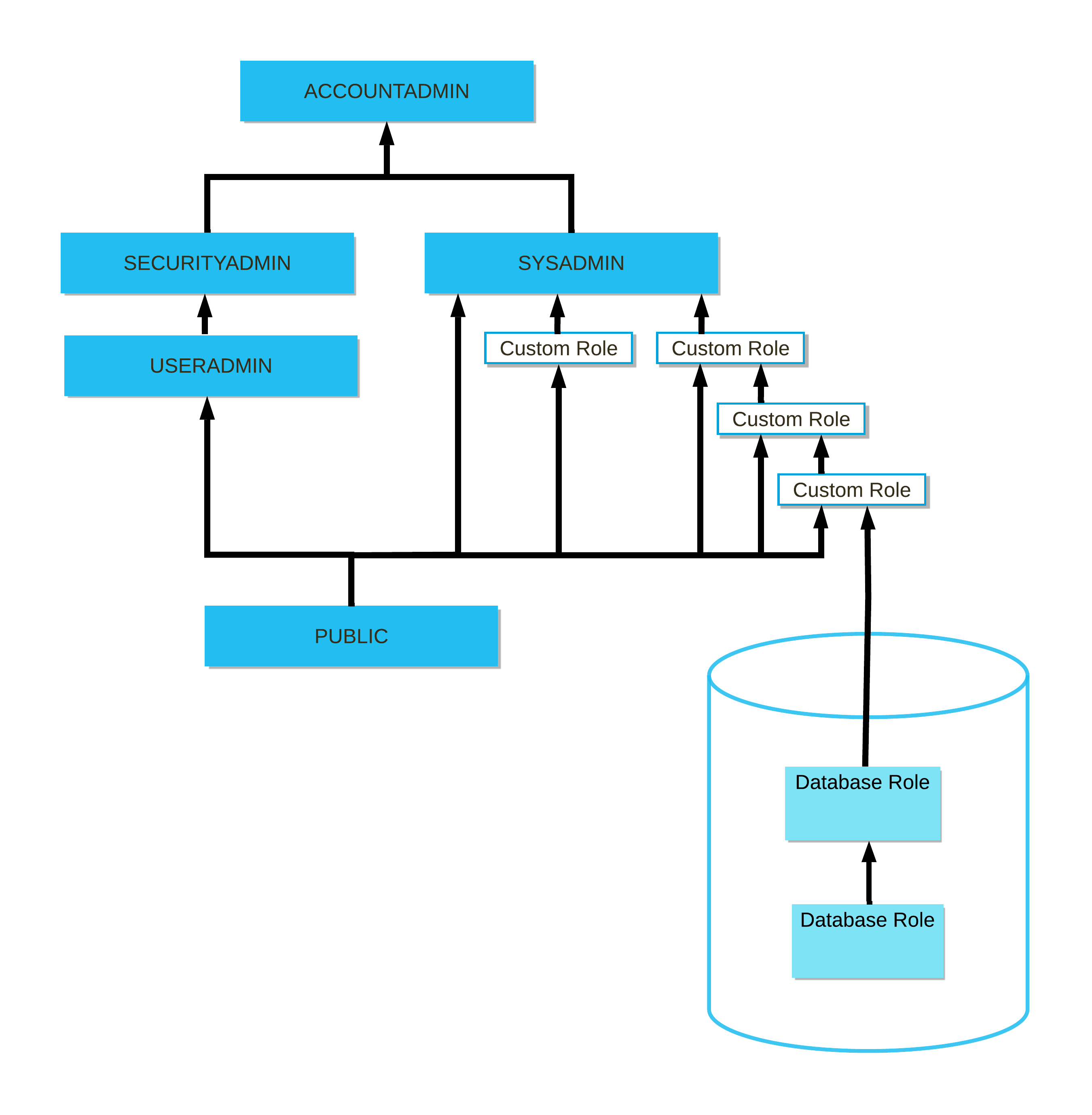 ORGADMIN is a separate system role that manages operations at the organization level. This role is not included in the hierarchy of system roles.

For a more specific example of role hierarchy and privilege inheritance, consider the following scenario: 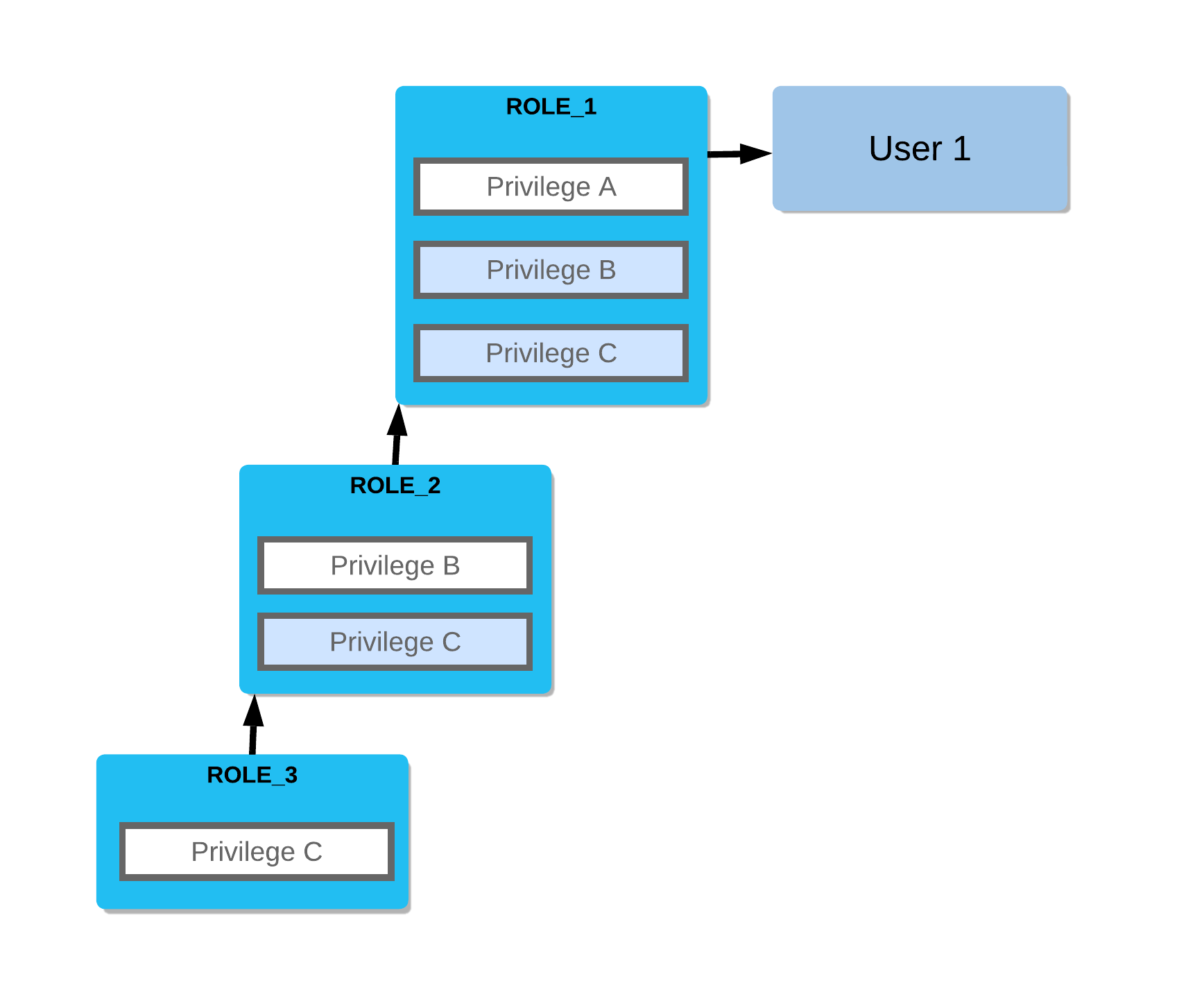 Every active user session has a “current role,” also referred to as a primary role. When a session is initiated (e.g. a user connects via JDBC/ODBC or logs in to the Snowflake web interface), the current role is determined based on the following criteria:

For organizations whose security model includes a large number of roles, each with a fine granularity of authorization via permissions, the use of secondary roles simplifies role management. All roles that were granted to a user can be activated in a session. Secondary roles are particularly useful for SQL operations such as cross-database joins that would otherwise require creating a parent role of the roles that have permissions to access the objects in each database.

There is no concept of a “super-user” or “super-role” in Snowflake that can bypass authorization checks. All access requires appropriate access privileges.