This topic provides best practices and important considerations for managing secure access to your Snowflake account and data stored within the account. In particular, it provides general guidance for configuring role-based access control, which limits access to objects based on a user’s role.

Note that ACCOUNTADMIN is not a superuser role. This role only allows viewing and managing objects in the account if this role, or a role lower in a role hierarchy, has sufficient privileges on the objects.

In the system role hierarchy, the other administrator roles are children of this role:

We strongly recommend the following precautions when assigning the ACCOUNTADMIN role to users:

It also helps if you associate an actual person’s email address to ACCOUNTADMIN users, so that Snowflake Support knows who to contact in an urgent situation.

The ACCOUNTADMIN role is intended for performing initial setup tasks in the system and managing account-level objects and tasks on a day-to-day basis. As such, it should not be used to create objects in your account, unless you absolutely need these objects to have the highest level of secure access. If you create objects with the ACCOUNTADMIN role and you want users to have access to these objects, you must explicitly grant privileges on the objects to the roles for these users.

Instead, we recommend creating a hierarchy of roles aligned with business functions in your organization and ultimately assigning these roles to the SYSADMIN role. For more information, see Aligning Object Access with Business Functions in this topic.

To help prevent account administrators from inadvertently using the ACCOUNTADMIN role to create objects, assign these users additional roles and designate one of these roles as their default (i.e. do not make ACCOUNTADMIN the default role for any users in the system).

This doesn’t prevent them from using the ACCOUNTADMIN role to create objects, but it forces them to explicitly change their role to ACCOUNTADMIN each time they log in. This can help make them aware of the purpose/function of roles in the system and encourage them to change to the appropriate role for performing a given task, particularly when they need to perform account administrator tasks.

We recommend using a role other than ACCOUNTADMIN for automated scripts. If, as recommended, you create a role hierarchy under the SYSADMIN role, all warehouse and database object operations can be performed using the SYSADMIN role or lower roles in the hierarchy. The only limitations you would encounter is creating or modifying users or roles. These operations must be performed by a user with the SECURITYADMIN role or another role with sufficient object privileges.

For example, suppose mytable is created in mydb.myschema. In order to query mytable, a user must have the following privileges at a minimum:

For instructions to create a role hierarchy, see Creating a Role Hierarchy.

Consider taking advantage of role hierarchies to align access to database objects with business functions in your organization. In a role hierarchy, roles are granted to other roles to form an inheritance relationship. Permissions granted to roles at a lower level are inherited by roles at a higher level.

For optimal flexibility in controlling access to database objects, create a combination of object access roles with different permissions on objects and assign them as appropriate to functional roles:

There is no technical difference between an object access role and a functional role in Snowflake. The difference is in how they are used logically to assemble and assign sets of permissions to groups of users.

As a simple example, suppose two databases in an account, fin and hr, contain payroll and employee data, respectively. Accountants and analysts in your organization require different permissions on the objects in these databases to perform their business functions. Accountants should have read-write access to fin but might only require read-only access to hr because human resources personnel maintain the data in this database. Analysts could require read-only access to both databases.

Permissions on existing database objects are granted via the following hierarchy of access roles and functional roles:

When new objects are added in each database, consider automatically granting privileges on the objects to roles based on object type (e.g. schemas, tables, or views). For information, see Simplifying Grant Management Using Future Grants (in this topic).

The following diagram shows the role hierarchy for this example: 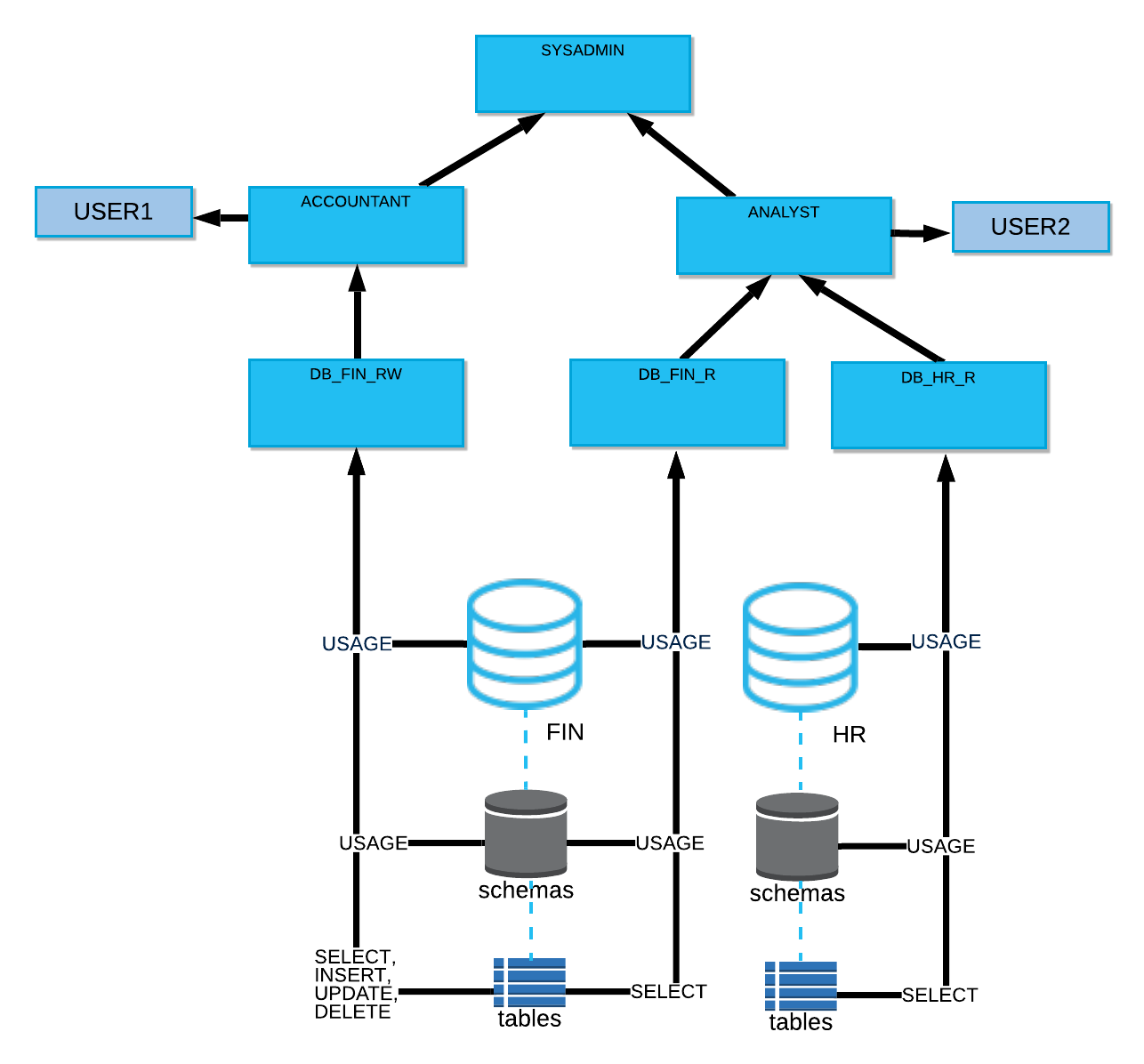 Database roles in Snowflake is a preview feature and is available to all accounts.

Database roles are essentially the same as traditional roles created at the account level (i.e. custom account roles) except for their scope: To permit SQL actions on objects within a database, privileges can be granted to a database role in the same database.

Database roles are intended to satisfy the following use cases:

Without database roles, account administrators in data consumer accounts grant a single privilege, IMPORTED PRIVILEGES, to roles to allow their users to access all databases and database objects (tables, secure views, etc.) in a share. There is no option to allow different groups of users in a data consumer account to access a subset of the shared objects. This all or nothing approach requires data providers to create multiple shares to grant access to different objects in the same databases.

With regular (i.e. non-managed) schemas in a database, object owners (i.e. roles with the OWNERSHIP privilege on one or more objects) can grant access on those objects to other roles, with the option to further grant those roles the ability to manage object grants.

Note that a role that holds the global MANAGE GRANTS privilege can grant additional privileges to the current (grantor) role.

Future grants allow defining an initial set of privileges on objects of a certain type (e.g. tables or views) in a specified schema. As new objects are created, the defined privileges are automatically granted to a role, simplifying grant management.

Consider the following scenario, in which a particular role is granted the SELECT privilege on all new tables created in schema. At a later date, the decision is made to revoke the privilege from this role and instead grant it to a different role. Using the ON FUTURE keywords for new tables and the ALL keyword for existing tables, few SQL statements are required to grant and revoke privileges on new and existing tables. For example:

A user cannot view the result set from a query that another user executed. This behavior is intentional. For security reasons, only the user who executed a query can access the query results.

This behavior is not connected to the Snowflake access control model for objects. Even a user with the ACCOUNTADMIN role cannot view the results for a query run by another user.