Traditional data warehouses rely on static partitioning of large tables to achieve acceptable performance and enable better scaling. In these systems, a partition is a unit of management that is manipulated independently using specialized DDL and syntax; however, static partitioning has a number of well-known limitations, such as maintenance overhead and data skew, which can result in disproportionately-sized partitions.

In contrast to a data warehouse, the Snowflake Data Platform implements a powerful and unique form of partitioning, called micro-partitioning, that delivers all the advantages of static partitioning without the known limitations, as well as providing additional significant benefits.

Sections in this topic:

Snowflake stores metadata about all rows stored in a micro-partition, including:

Micro-partitioning is automatically performed on all Snowflake tables. Tables are transparently partitioned using the ordering of the data as it is inserted/loaded.

The benefits of Snowflake’s approach to partitioning table data include:

All DML operations (e.g. DELETE, UPDATE, MERGE) take advantage of the underlying micro-partition metadata to facilitate and simplify table maintenance. For example, some operations, such as deleting all rows from a table, are metadata-only operations.

The micro-partition metadata maintained by Snowflake enables precise pruning of columns in micro-partitions at query run-time, including columns containing semi-structured data. In other words, a query that specifies a filter predicate on a range of values that accesses 10% of the values in the range should ideally only scan 10% of the micro-partitions.

For example, assume a large table contains one year of historical data with date and hour columns. Assuming uniform distribution of the data, a query targeting a particular hour would ideally scan 1/8760th of the micro-partitions in the table and then only scan the portion of the micro-partitions that contain the data for the hour column; Snowflake uses columnar scanning of partitions so that an entire partition is not scanned if a query only filters by one column.

In other words, the closer the ratio of scanned micro-partitions and columnar data is to the ratio of actual data selected, the more efficient is the pruning performed on the table.

For time-series data, this level of pruning enables potentially sub-second response times for queries within ranges (i.e. “slices”) as fine-grained as one hour or even less.

Not all predicate expressions can be used to prune. For example, Snowflake does not prune micro-partitions based on a predicate with a subquery, even if the subquery results in a constant.

Typically, data stored in tables is sorted/ordered along natural dimensions (e.g. date and/or geographic regions). This “clustering” is a key factor in queries because table data that is not sorted or is only partially sorted may impact query performance, particularly on very large tables.

In Snowflake, as data is inserted/loaded into a table, clustering metadata is collected and recorded for each micro-partition created during the process. Snowflake then leverages this clustering information to avoid unnecessary scanning of micro-partitions during querying, significantly accelerating the performance of queries that reference these columns. 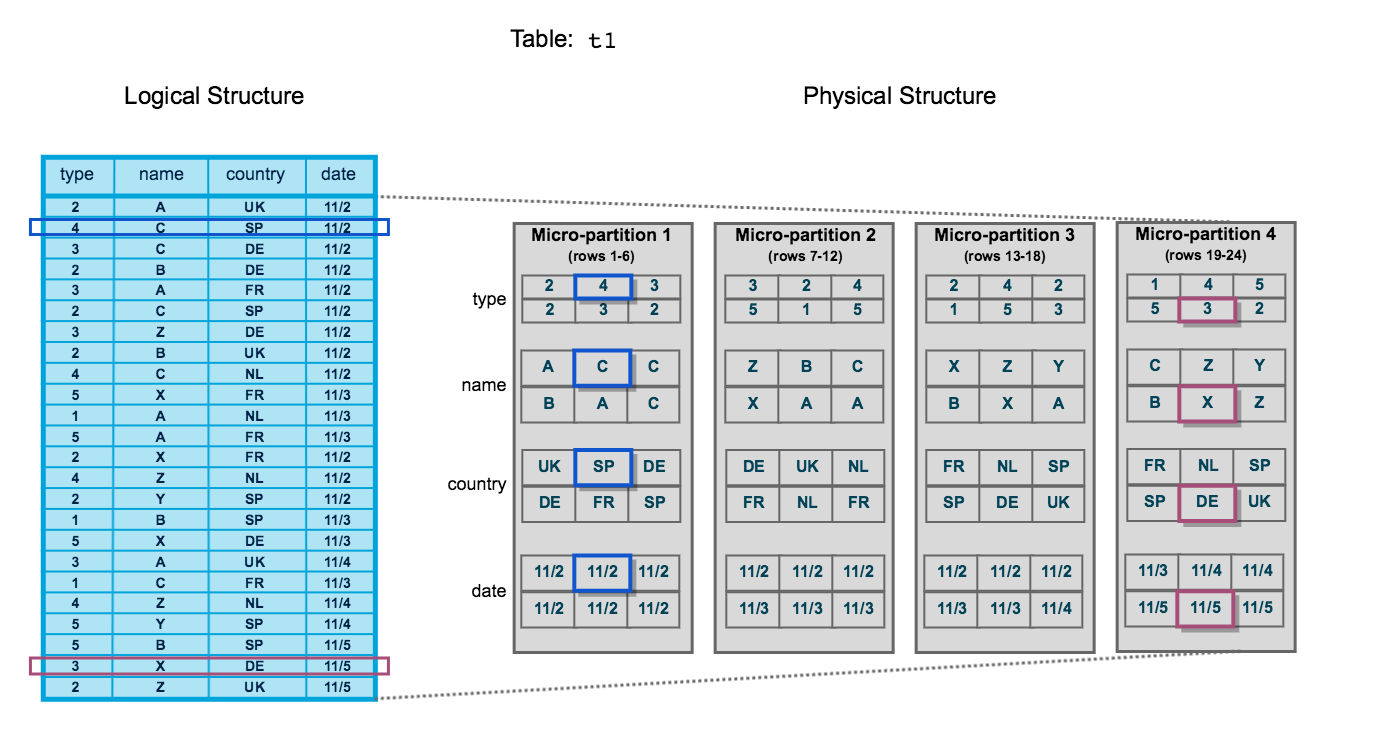 Note that this diagram is intended only as a small-scale conceptual representation of the data clustering that Snowflake utilizes in micro-partitions. A typical Snowflake table may consist of thousands, even millions, of micro-partitions.

Snowflake maintains clustering metadata for the micro-partitions in a table, including:

Clustering depth can be used for a variety of purposes, including:

A table with no micro-partitions (i.e. an unpopulated/empty table) has a clustering depth of 0.

The clustering depth for a table is not an absolute or precise measure of whether the table is well-clustered. Ultimately, query performance is the best indicator of how well-clustered a table is:

The following diagram provides a conceptual example of a table consisting of five micro-partitions with values ranging from A to Z, and illustrates how overlap affects clustering depth: 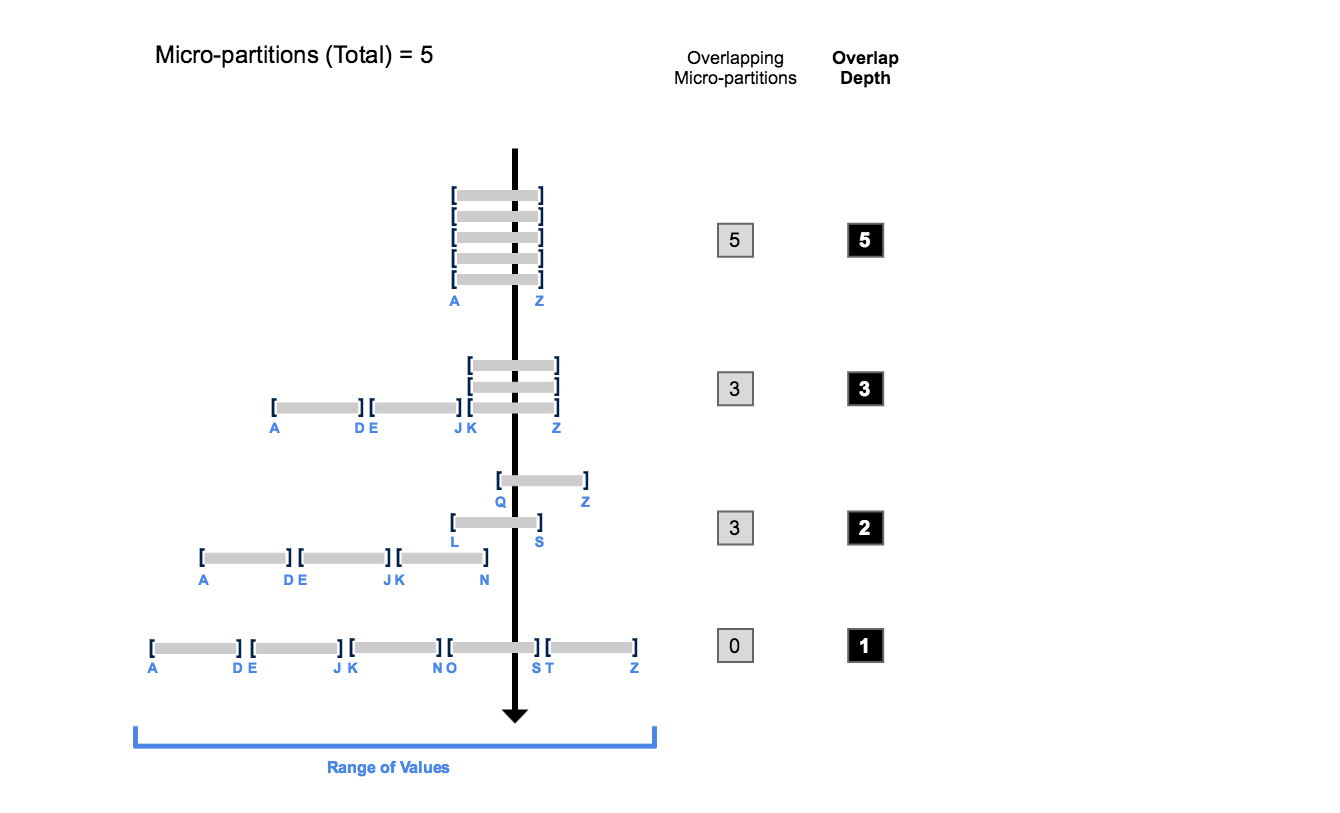 As this diagram illustrates:

To view/monitor the clustering metadata for a table, Snowflake provides the following system functions:

For more details about how these functions use clustering metadata, see Clustering Depth Illustrated (in this topic).