In general, Snowflake produces well-clustered data in tables; however, over time, particularly as DML occurs on very large tables (as defined by the amount of data in the table, not the number of rows), the data in some table rows might no longer cluster optimally on desired dimensions.

To improve the clustering of the underlying table micro-partitions, you can always manually sort rows on key table columns and re-insert them into the table; however, performing these tasks could be cumbersome and expensive.

Instead, Snowflake supports automating these tasks by designating one or more table columns/expressions as a clustering key for the table. A table with a clustering key defined is considered to be clustered.

Clustering keys are not intended for all tables due to the costs of initially clustering the data and maintaining the clustering. Clustering is optimal when either:

For more information about choosing which tables to cluster, see: Considerations for Choosing Clustering for a Table.

What is a Clustering Key?¶

A clustering key is a subset of columns in a table (or expressions on a table) that are explicitly designated to co-locate the data in the table in the same micro-partitions. This is useful for very large tables where the ordering was not ideal (at the time the data was inserted/loaded) or extensive DML has caused the table’s natural clustering to degrade.

Some general indicators that can help determine whether to define a clustering key for a table include:

Using a clustering key to co-locate similar rows in the same micro-partitions enables several benefits for very large tables, including:

Although clustering can substantially improve the performance and reduce the cost of some queries, the compute resources used to perform clustering consume credits. As such, you should cluster only when queries will benefit substantially from the clustering.

Typically, queries benefit from clustering when the queries filter or sort on the clustering key for the table. Sorting is commonly done for ORDER BY operations, for GROUP BY operations, and for some joins. For example, the following join would likely cause Snowflake to perform a sort operation:

After you define a clustering key for a table, the rows are not necessarily updated immediately. Snowflake only performs automated maintenance if the table will benefit from the operation. For more details, see Reclustering (in this topic) and Automatic Clustering.

Considerations for Choosing Clustering for a Table¶

Whether you want faster response times or lower overall costs, clustering is best for a table that meets all of the following criteria:

If your goal is primarily to reduce overall costs, then each clustered table should have a high ratio of queries to DML operations (INSERT/UPDATE/DELETE). This typically means that the table is queried frequently and updated infrequently. If you want to cluster a table that experiences a lot of DML, then consider grouping DML statements in large, infrequent batches.

Also, before choosing to cluster a table, Snowflake strongly recommends that you test a representative set of queries on the table to establish some performance baselines.

A single clustering key can contain one or more columns or expressions. For most tables, Snowflake recommends a maximum of 3 or 4 columns (or expressions) per key. Adding more than 3-4 columns tends to increase costs more than benefits.

Snowflake recommends prioritizing keys in the order below:

If you typically filter queries by two dimensions (e.g. application_id and user_status columns), then clustering on both columns can improve performance.

The number of distinct values (i.e. cardinality) in a column/expression is a critical aspect of selecting it as a clustering key. It is important to choose a clustering key that has:

In general, if a column (or expression) has higher cardinality, then maintaining clustering on that column is more expensive.

If you want to use a column with very high cardinality as a clustering key, Snowflake recommends defining the key as an expression on the column, rather than on the column directly, to reduce the number of distinct values. The expression should preserve the original ordering of the column so that the minimum and maximum values in each partition still enable pruning.

For example, if a fact table has a TIMESTAMP column c_timestamp containing many discrete values (many more than the number of micro-partitions in the table), then a clustering key could be defined on the column by casting the values to dates instead of timestamps (e.g. to_date(c_timestamp)). This would reduce the cardinality to the total number of days, which typically produces much better pruning results.

As another example, you can truncate a number to fewer significant digits by using the TRUNC functions and a negative value for the scale (e.g. TRUNC(123456789, -5)).

When clustering on a text field, the cluster key metadata tracks only the first several bytes (typically 5 or 6 bytes). Note that for multi-byte character sets, this can be fewer than 5 characters.

As DML operations (INSERT, UPDATE, DELETE, MERGE, COPY) are performed on a clustered table, the data in the table might become less clustered. Periodic/regular reclustering of the table is required to maintain optimal clustering.

Reclustering in Snowflake is automatic; no maintenance is needed. For more details, see Automatic Clustering.

However, for certain accounts, manual reclustering has been deprecated, but is still allowed. For more details see Manual Reclustering.

Credit and Storage Impact of Reclustering¶

Similar to all DML operations in Snowflake, reclustering consumes credits. The number of credits consumed depends on the size of the table and the amount of data that needs to be reclustered.

This process can create significant data turnover because the original micro-partitions are marked as deleted, but retained in the system to enable Time Travel and Fail-safe. The original micro-partitions are purged only after both the Time Travel retention period and the subsequent Fail-safe period have passed (i.e. minimum of 8 days and up to 97 days for extended Time Travel, if you are using Snowflake Enterprise Edition (or higher)). This typically results in increased storage costs. For more information, see Snowflake Time Travel & Fail-safe.

Before defining a clustering key for a table, you should consider the associated credit and storage costs.

Building on the clustering diagram from the previous topic, this diagram illustrates how reclustering a table can help reduce scanning of micro-partitions to improve query performance: 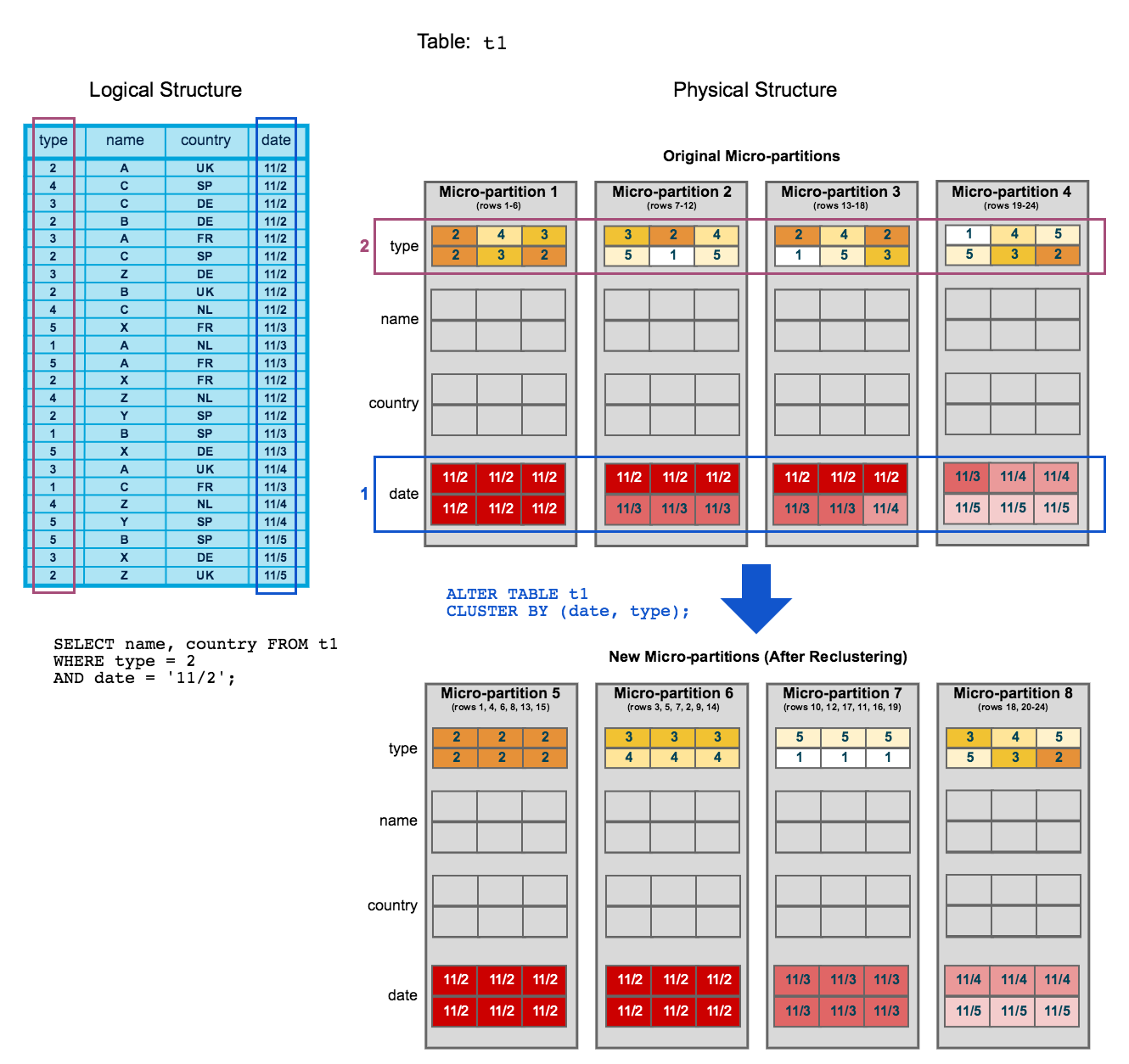 This example illustrates the impact of reclustering on an extremely small scale. Extrapolated to a very large table (i.e. consisting of millions of micro-partitions or more), reclustering can have a significant impact on scanning and, therefore, query performance.

Calculating the Clustering Information for a Table¶

Use the system function, SYSTEM$CLUSTERING_INFORMATION, to calculate clustering details, including clustering depth, for a given table. This function can be run on any columns on any table, regardless of whether the table has an explicit clustering key:

Defining a Clustering Key for a Table¶

A clustering key can be defined when a table is created by appending a CLUSTER BY clause to CREATE TABLE:

Where each clustering key consists of one or more table columns/expressions, which can be of any data type, except GEOGRAPHY, VARIANT, OBJECT, or ARRAY. A clustering key can contain any of the following:

Changing the Clustering Key for a Table¶

Dropping the Clustering Keys for a Table¶

At any time, you can drop the clustering key for a table using ALTER TABLE: