Available to all accounts.

Currently, this feature is not supported for Snowflake accounts in government regions.

The Query History page enables users to view and drill into the details of queries executed in the last 14 days.

A user can also access the Query History page from the Query Details pane for a query in a Snowsight worksheet. Click the actions (…) button » View in Query History.

The Query History page has the following features:

Query Profile provides a graphical representation of the main components of the processing plan for a selected query, with statistics for each component, along with details and statistics for the overall query.

Query Profile is a powerful tool for understanding the mechanics of queries. It can be used whenever you need to know more about the performance or behavior of a particular query. It is designed to help you spot typical mistakes in SQL query expressions to identify potential performance bottlenecks and improvement opportunities.

This topic refers to the following SQL query example, which joins two tables:

The following screenshot shows the profile for this query:

The interface consists of the following main elements:

If the query was processed in multiple steps, you can toggle between each step.

The middle pane displays a graphical representation of all the operator nodes for the selected step, including the relationships between each operator node.

The panes on the right side of the page display an overview of the query profile that displays a set of execution statistics and metrics. The display changes to operator details when an operator node is selected.

Query Profile displays each processing step in a separate pane. You can switch between panes by clicking the respective step. For our sample query, clicking Step 2 changes the view to:

The tree provides a graphical representation of the query execution plan. The execution plan is composed of objects that represent rowset operators. Arrows between the operators indicate the rowsets that flow out of one operator and into another.

The pane provides detailed information about the query, including its status and duration, the number of rows returned, as well as the executing user and warehouse information.

A major source of information provided in the detail pane is the various statistics, grouped in the following sections:

The following sections provide a list of the most common operator types and their attributes:

List of values provided with the VALUES clause. Attributes:

Represents access to data stored in stage objects. Can be a part of queries that scan data from stages directly, but also for data loading operations (i.e. COPY statements).

Represents access to an internal data object (e.g. an Information Schema table or the result of a previous query). Attributes:

Represents an operation that filters the records. Attributes:

Combines two inputs on a given condition. Attributes:

Non-equality join predicates might result in significantly slower processing speeds and should be avoided if possible.

Groups input and computes aggregate functions. Can represent SQL constructs such as GROUP BY, as well as SELECT DISTINCT. Attributes:

Represents constructs such as GROUPING SETS, ROLLUP and CUBE. Attributes:

Orders input on a given expression. Attributes:

Produces a part of the input sequence after sorting, typically a result of an ORDER BY ... LIMIT ... OFFSET ... construct in SQL.

Special filtering operation that removes tuples that can be identified as not possibly matching the condition of a Join further in the query plan. Attributes:

Represents processing by an external function.

Adds records to a table either through an INSERT or COPY operation. Attributes:

Removes records from a table. Attributes:

Updates records in a table. Attributes:

Performs a MERGE operation on a table. Attributes:

Represents a COPY operation that exports data from a table into a file in a stage. Attributes:

Some queries include steps that are pure metadata/catalog operations rather than data-processing operations. These steps consist of a single operator. Some examples include:

Used for creating or modifying objects, session, transactions, etc. Typically, these queries are not processed by a virtual warehouse and result in a single-step profile that corresponds to the matching SQL statement. For example:

DDL command for creating a table. For example:

Similar to other DDL commands, these queries result in a single-step profile; however, they can also be part of a multi-step profile, such as when used in a CTAS statement. For example:

A query that reuses the result of a previous query.

A query whose result is computed based purely on metadata, without accessing any data. These queries are not processed by a virtual warehouse. For example:

This section describes some of the problems you can identify and troubleshoot using Query Profile.

One of the common mistakes SQL users make is joining tables without providing a join condition (resulting in a “Cartesian Product”), or providing a condition where records from one table match multiple records from another table. For such queries, the Join operator produces significantly (often by orders of magnitude) more tuples than it consumes.

This can be observed by looking at the number of records produced by a Join operator, and typically is also reflected in Join operator consuming a lot of time. 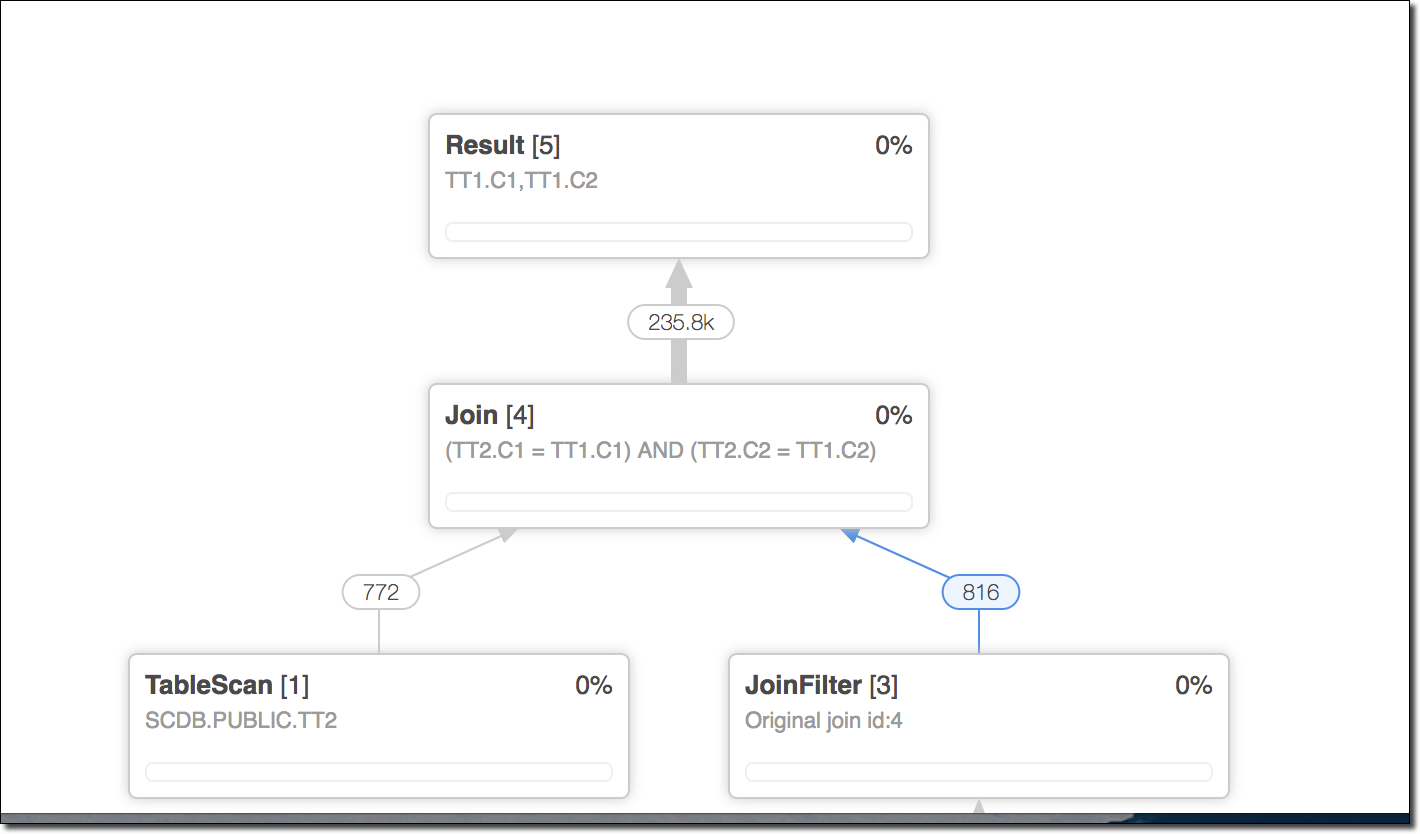 In SQL, it is possible to combine two sets of data with either UNION or UNION ALL constructs. The difference between them is that UNION ALL simply concatenates inputs, while UNION does the same, but also performs duplicate elimination.

A common mistake is to use UNION when the UNION ALL semantics are sufficient. These queries show in Query Profile as a UnionAll operator with an extra Aggregate operator on top (which performs duplicate elimination).

Queries Too Large to Fit in Memory¶

For some operations (e.g. duplicate elimination for a huge data set), the amount of memory available for the servers used to execute the operation might not be sufficient to hold intermediate results. As a result, the query processing engine will start spilling the data to local disk. If the local disk space is not sufficient, the spilled data is then saved to remote disks.

This spilling can have a profound effect on query performance (especially if remote disk is used for spilling). To alleviate this, we recommend:

Snowflake collects rich statistics on data allowing it not to read unnecessary parts of a table based on the query filters. However, for this to have an effect, the data storage order needs to be correlated with the query filter attributes.

The efficiency of pruning can be observed by comparing Partitions scanned and Partitions total statistics in the TableScan operators. If the former is a small fraction of the latter, pruning is efficient. If not, the pruning did not have an effect.

Of course, pruning can only help for queries that actually filter out a significant amount of data. If the pruning statistics do not show data reduction, but there is a Filter operator above TableScan which filters out a number of records, this might signal that a different data organization might be beneficial for this query.